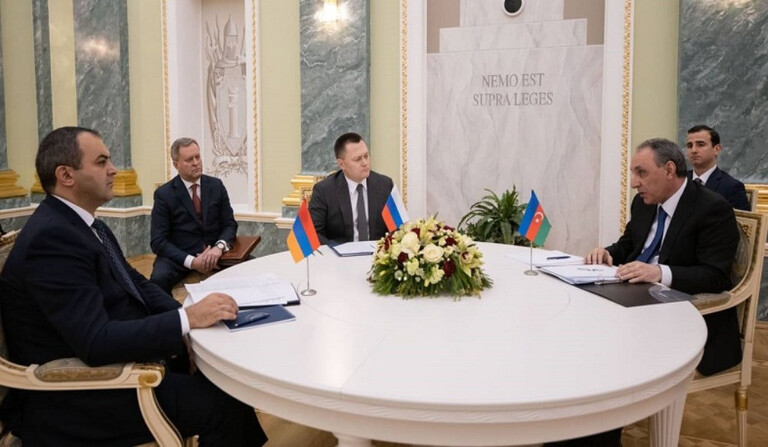 Following a trilateral meeting between Armenian, Azerbaijani, and Russian leaders In Moscow on Monday, the leader of the opposition party Bright Armenia Edmon Marukyan criticized the ‘joy’ of the pro-government forces over the results of the meeting.

The meeting of the leaders was concluded with a joint declaration agreeing on unblocking of all economic and transport links in the region for the first time since Azerbaijan and Turkey closed borders with Armenia during the first Nagorno Karabakh war. Armenian PM Pashinyan said in his speech after the meeting that ‘joint Statement can seriously change the economic potential of our region and substantially enhance its investment appeal.’ He added, however, that the Armenian side was unable to reach a final agreement on the exchange of prisoners of war.

According to the opposition leader Marukyan, the primary expectation that Armenians had of this meeting was an agreement on returning Armenian hostages captured by Azerbaijani forces during and after the 2020 Nagorno Karabakh war. Marukyan reminded that the issue of the prisoners of war has been suspended for months.

Earlier on Friday, Pashinyan has published an article on the ‘priorities of further implementation of the trilateral statement’ saying that the unblocking of all economic and transport infrastructures is Armenia’s second priority and is conditional on the exchange of prisoners of wars.

Since the beginning of the recent Nagorno Karabakh war video-streams were circulated by the Azerbaijani Telegram channels depicting Armenian PoWs being inhumanely treated and killed. Human Rights Watch urged Azerbaijani authorities to follow the obligations of humanitarian law. Later, Azerbaijan started prosecution against Armenian PoW calling them ‘terrorists.’ In December, ECHtR applied interim measures for 23 out of more than one hundred PoWs taken hostage by Azerbaijan.

‘Azerbaijan has always delayed the return of captives with the obvious purpose of causing mental suffering and creating tension in the Armenian society, Human Rights Defender of Armenia, Arman Tatoyan said at a press conference on Tuesday.

Tatoyan condemned the letter issued by Azerbaijan’s Permanent Representative to the United Nations claiming that 62 residents of the Shirak region of Armenia were transferred to Artsakh for sabotage. According to Tatoyan, the problem of the prisoners of war is utterly distorted and Azerbaijani claims is a gross violation of international law and the rights of the PoWs, since the 62 people were captured when performing their military duties. The Human Rights Defender reminded about the photo and video evidence depicting Armenian PoWs tortures and killing by the Azerbaijani servicemen.

Tatoyan also commented on the demarcation issues which caused distress among the residents of the Armenian southeastern Syunik region who reported that Azerbaijani servicemen appear on the road with weapons and obviously provoke the residents.

Mikayel Hambardzumyan, former head of Armenia’s National Security Service during the recent war Nagorno-Karabakh, said in an interview that neither the public nor the parliament was presented with Russian President Vladimir Putin’s proposal to stop the war earlier, with a more favorable ceasefire agreement, CivilNet reports. He claims that Pashinyan was reported by the Security Service about the losses of the Armenian side and further perspectives hourly.

Hambardzumyan reminded that later Putin announced about the proposal to end the war on October 19. According to him, human and territorial losses of the Armenian side would have been incomparably less had Pashinyan agreed to that proposal. ‘I cannot say why those proposals were not discussed and accepted,’ Hambardzumyan said adding that he was unaware of them and resigned one day before the war ended with November 9 trilateral truce statement brokered by Moscow. ‘The war should have been stopped much earlier,’ Hambardzumyan said.