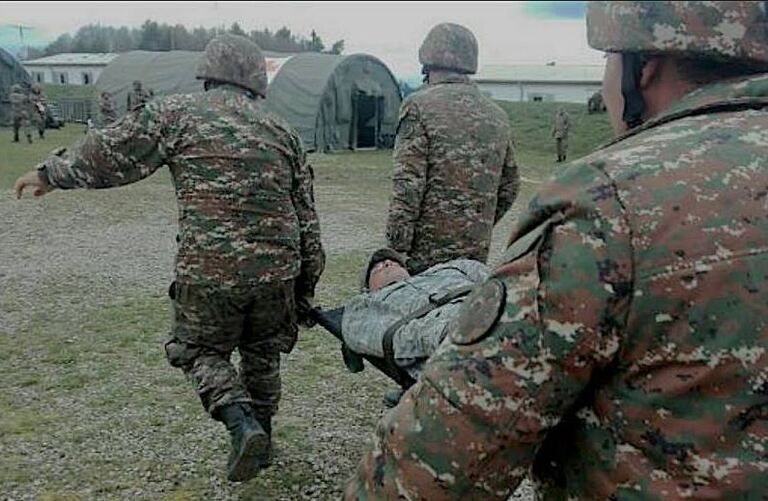 A serviceman of the Artsakh Defence Army received a gunshot wound when Azerbaijani forces grossly violated the ceasefire and opened gunfire at the Armenian positions of the Defense Army. 20-year-old Vardan Kirakosyan was transferred to the military hospital.  The investigation has been initiated in order to clarify the circumstances of the incident, Artsakh Defence Army reports.

The Artsakh Ministry of Foreign Affairs made a statement strongly condemning ‘the provocative steps of the Azerbaijani side’ and qualified them as 'an action aimed at destabilizing the situation in the Azerbaijani-Karabakh conflict zone and disrupting the peacekeeping efforts.'

The Ministry called on Azerbaijan to strictly follow the commitments taken under the November 9 trilateral statement of the leaders of Armenia, Russia, and Azerbaijan and ‘refrain from provocative actions that could undermine the current truce.'

Earlier today, Russian President Vladimir Putin briefed Turkish President Recep Tayyip Erdogan about the results of the recent trilateral meeting with Armenian and Azerbaijani leaders, Russian President’s Press Office reports.  Putin was reported to have emphasized the intention of the sides to normalize relations and hands-on cooperation in establishing a peaceful life and resuming economic and transport ties. The sides also discussed a Russian-Turkish joint center to monitor the ceasefire in the conflict zone.

Vazgen Manukyan, the candidate of interim Prime Minster nominated by a coalition of more than a dozen political parties, said that Armenia did not gain any positive results from the recent trilateral meeting between Armenian, Azerbaijani, and Russian leaders. In his words, the issue of the Armenian prisoners of war remains unsolved proving that Pashinyan is unable to speak for Armenia’s interests.

‘With the November 9 statement, Azerbaijan gained more it could dream,’ Manukyan said referring to the unblocking of the regional transport connection. He added that Baku has already violated Provision 1 ('…the Parties, shall remain at their current positions') and Provision 8 ('…an exchange of prisoners of war, hostages and other detained persons and bodies of the dead is to be carried out') of the Moscow-brokered truce statement.

Manukyan said that Pashinyan’s negligence caused ignorance of such crucial issues as settlement of the Nagorno Karabakh conflict within OSCE Minsk group Co-Chairmanship format, the Status of Artsakh (Nagorno Karabakh), and the return of PoWs.

According to the opposition leader, Pashinyan failed to raise the issue of demarcations and delimitations in the Armenian southeastern Syunik region, where Azerbaijan violates Provision 1 of the truce statement thus creating dangerous conditions for the local residents.

‘I find Syunik to be our statehood’s backbone, and we must take all measures to ensure the security of the Republic of Armenia in Syunik,’ Armenian Prime Minister Nikol Pashinyan said during a meeting on Syunik’s security, Armenpress news agency reports.

Pashinyan noted that Syunik has gained a new status of border region and measures should be taken to ensure the security of Syunik which he called Armenian ‘statehood’s backbone.’ The improvement of roads, communication infrastructures, solution of socio-economic problems and other directions of activities were also discussed.

After the recent Nagorno Karabakh war, the demarcations and delimitations in Armenia’s southeastern Syunik region made the distance between Azerbaijani armed forces positions and Armenian civilian settlements dangerously close. Two Armenian villages and other territories fell under Azerbaijani control as a result of border demarcations based on GPS data ignoring basic social and economic factors for the residents.

Earlier the residents of Armenian southern border villages alarmed that they were given two hours by Azerbaijani forces to leave their homes. The residents of the region also reported that Azerbaijani servicemen appear on the roads with weapons. Armenian Human Rights Defender Arman Tatoyan said that these actions cause distress among the residents and violate human rights.

“Amid the unprecedented global health crisis, the violation of the decades-long ceasefire in the region has led to numerous casualties, large-scale ethnic cleansing of the indigenous people of Artsakh, deliberate destruction, desecration and vandalism of the Armenian religious and cultural monuments,’ says Armenian Foreign Minister Ara Ayvazyan in his letter to UN Secretary-General Antonio Guterres.

Ayvazyan touched upon the violation of the November 9 trilateral statement by Azerbaijan ending the recent Nagorno Karabakh war. Speaking about the post-truce military attack by Azerbaijan, the Minister noted that 64 Armenian servicemen were captured by Azerbaijani forces as a result of that attack. violating Azerbaijan's commitments to maintain the ceasefire established by the Moscow-brokered statement. Minister Aivazian also drew the attention of the UN Secretary-General to the reluctance of Azerbaijan regarding the cooperation with international organizations in cultural heritage protection.

Earlier today, Armenian Foreign Ministry made a statement about the 31st anniversary of the anti-Armenian massacres in Baku and destruction of the Armenian historical-cultural heritage of the city.

The Ministry reminds that neither the masterminds not the perpetrators of the massacres of Armenians have not been held accountable and continue to be glorified as heroes. According to the statement, Azerbaijan continues its policy of war crimes and ethnic cleansing evidenced by the wiping out of the entire Armenian population from the territories that fell under the Azerbaijani control.