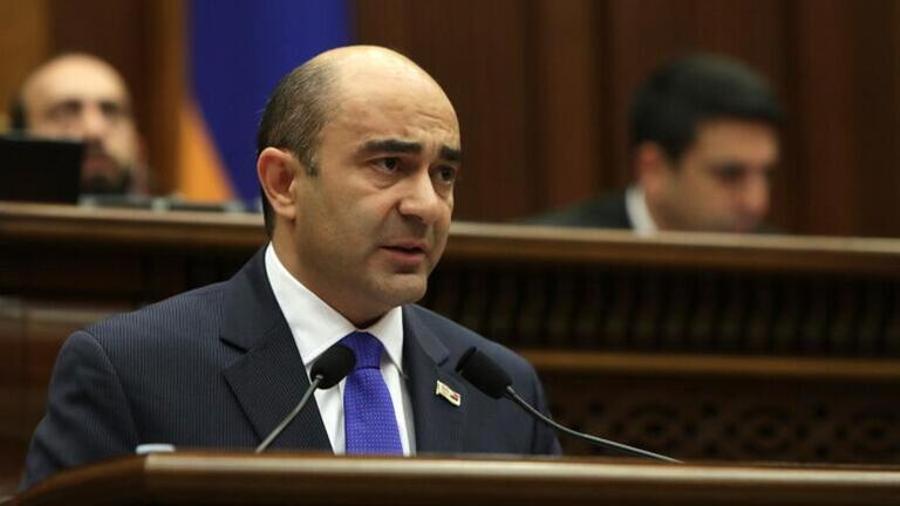 Prior to the snap parliamentary elections on June 20, the situation of the pre-election power struggle will intensify so much that we can almost predict that we are on the verge of a civil war. Edmon Marukyan, chairman of the opposition “Bright Armenia” Party and head of its parliamentary faction, said this during the party’s press conference today.

Marukyan stressed that if the election campaign of the ruling party and the former authorities continues in this spirit, it will be impossible to avoid clashes. According to him, the political arena in Armenia is arranged in such a way that the “Bright Armenia” Party is a political force that has no enemies.

"We will impose internal political peace on these irreconcilable parties because they will not find common ground with each other, they will not spare any resources to destroy each other and as a result, they will destroy all of us. In fact, we have witnessed such a battle. We are not saying, give us a vote so that we will come to power; we are saying, authorize us to bring peace to the two conflicting forces, which are obsessed with destroying each other. There has always been irreconcilability, opposition struggle, movements inside the country, but at that time there were different conditions. When we were protesting at that time, the enemy was not in Syunik or Gegharkunik region with an army of a thousand, the enemy was not planning to get a corridor in Zangezur. It was bad then that there was no unification, but now we need to realize that something has changed in our lives," Marukyan said.

Armenia’s second president and the first member of the "Armenia" alliance Robert Kocharyan referred to the issue of leaving Artsakh out of the talks.

"I have been the President of Armenia since 1998. There has been no negotiation process since the Lisbon Summit in December 1996. I was elected President of the Republic of Armenia in February 1998, but I came to the office in April. Before that, intensive negotiations have taken place for about 1.5 years between the Advisor to the President of Azerbaijan Heydar Aliyev Vafa Guluzade and Zhirayr Liparityan, Advisor to the First President of Armenia. Karabakh did not take part in those talks. In January 1997, when Zhirayr Liparityan left the office, he gave a press conference and announced that they started this process with Vafa Guluzade, thinking that they would help speed up the process, but the opposite happened․ The one who started and continued this process without Karabakh admitted his mistake. If needed, we can publish those facts once again," Robert Kocharyan said.

The "Sovereign Armenia" party has issued a statement, which we present below:

“Ahead of the 2021 snap parliamentary elections, Public Television of Armenia and The Institute for National Democracy (NDI) are launching four televised debates entitled "Armenia Chooses", where 26 political forces will present their programs and visions.

It should be noted that the organizers have divided the TV debates of the first numbers of 26 political forces into two groups, where in the first group Nikol Pashinyan will have to debate with the representatives of the previous authorities and with the leaders of the parties registered before 2018, thus having a tangible impact on the election results.

It is unacceptable for the "Sovereign Armenia" party to organize a televised debate on this principle, as the maintenance of equal competition conditions is violated, the forces with great media and financial capabilities are given an advantage.

"We call on the organizers to change the sequence of the participation of the first numbers of the political forces and the order of their election prior to the “Armenia chooses" TV debate, which is to be held on June 16th. Otherwise, we consider it inexpedient to participate in that format.

Mikayel Nahapetyan, a member of the “Citizen's Decision” party commented on upcoming pre-election debates on Public Television of Armenia.

"You all saw that during the time when the decision was to be made as to who will debate with whom, Nikol Pashinyan publicly confidently stated that he is waiting for certain people on Public Television of Armenia and that he should debate with them. Pashinyan ordered that those people should be in his group, after which the question arose as to what principle should be chosen for those people to get into the same group," said Mikayel Nahapetyan and added that as a result a disgraceful and unfair method was chosen.

"It was decided that the parties that had been registered for a long time, would be in one league, and the newer registered parties should be in another one. But then a second principle has been set that when it comes to alliances, not the date of the registration of the alliance is taken into account, but the oldest of the parties in the alliance. This has solved the issue that Nikol Pashinyan will be able to debate with the people he considers more suitable opponents," Nahapetyan mentioned.

Mikayel Nahapetyan also expressed the position of their party, which is that the "Citizen's decision" does not see any meaning in participating in the debate in this logic.

Prior to snap parliamentary elections, the ruling party of Armenia published the message of its candidate Nikol Pashinyan. Read the highlights of the message below:

"They are trying to convince you that you have made a mistake, thinking that you can be decisive in your homeland, in your state. They are trying to convince you that time has shown the opposite, that you must either be submissive in your homeland or lose your homeland. And I turn to you with the conviction that the truth is just the opposite. For many years we tolerated many things for the sake of the homeland, and as a result, it turned out that we tolerated the destruction of the homeland. Now you have to choose between obeying to time or obeying time to you. I want you to obey the time to you because the time that was not submissive to you yesterday is the key reason for our losses today. Our bitterness today has accumulated yesterday. Remember how you lived for many years with the conviction that "there is no future in this country"? And while you were changing your mind, the biggest disaster happened and you started thinking again that there is no future. But today was the future of yesterday. Tomorrow is the future of today, and it will come if you decide that it exists, because you should not lose the ability to dream about the future, to turn the future into daily work”.

In a public post on Facebook Armenia's former ambassador to the Holy See, Mikayel Minasyan referred to the upcoming snap parliamentary elections.

He works instead of all the people who, ex officio or instinctively, should have at least verbally reacted to the growing security threats in Armenia every day, but are silent, under the "high umbrella" of public indifference.

In exactly two weeks it will be the most conscious election in Armenia. There has never been such a thing in the history of Armenia. Everyone knows everything about all the favorites.

Everyone's path is clear, the shortcomings and omissions are obvious.

And all those who declare that they are disappointed and will not vote, I hope, one day the bodies of their relatives will not be found in the basement floor after 7 months.

Go, choose according to reality, know that your inner rebellion against choosing anyone is in favor of Nikol,” Minasyan wrote.