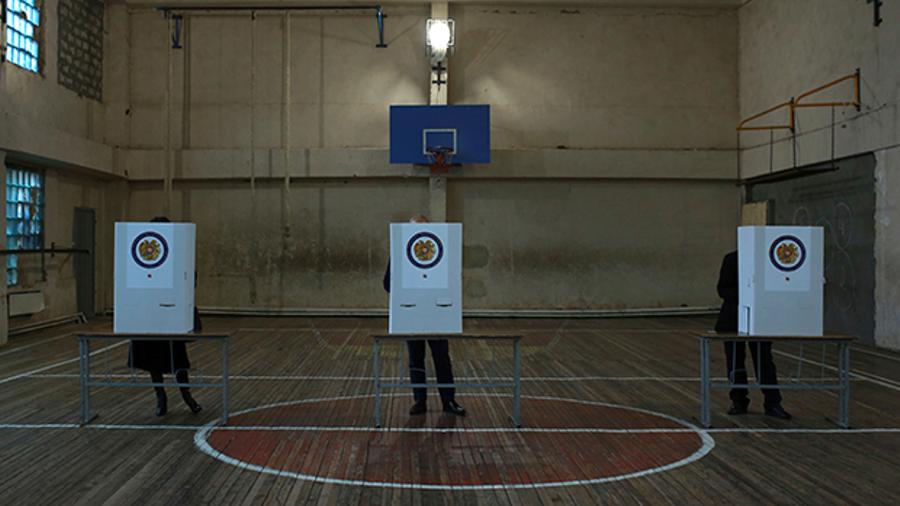 The pre-election campaign kicks off in Armenia

The campaign for snap parliamentary elections in Armenia officially kicks off today. It will last until June 18. The snap parliamentary elections will take place on June 20. A total of 22 political parties and 4 alliances are running in the elections. Armenia’s first president Levon Ter-Petrosyan leads the list of the "Armenian National Congress" party, the second president Robert Kocharyan is the first on the list of the "Armenia" alliance, the prime minister Nikol Pashinyan leads the list of the "Civil Contract" party. The third president Serzh Sarkissian is not presented in the party lists, but the Republican Party, of which he is the leader, is participating in the elections in the "I have Honor" alliance, and Sarkissian himself is actively participating in the campaign.

The Central Electoral Commission has called on all participants in the electoral process to strictly adhere to the requirements of the RA Electoral Code.

“The pre-election campaign for the June 20, 2021 snap parliamentary elections kicks off today. Wishing everyone an effective campaign, we call on all parties (party alliances), voters, and all participants in the electoral process to strictly adhere to the requirements of the RA Electoral Code. In public speeches, in any speech, on social media, in political or campaign events, exclude insult, hatred, sowing of enmity, words of violence or hatred and propaganda,” the Commission said in a statement.

Nikol Pashinyan to be on holiday from June 7-18

Armenia’s acting Prime Minister Nikol Pashinyan will be on holiday from June 7-18 inclusive, e-gov.am informs. According to the decision, acting vice PM Tigran Avinyan will implement PM’s functions during this period. It should be reminded that the campaign for the snap parliamentary elections has started today.

Within the framework of the snap parliamentary elections, the Public Television of Armenia has initiated TV debates entitled "Armenia Votes", to which representatives of all 26 political forces participating in the elections will be invited. Candidates will have the opportunity to present their election programs and position on key issues․ The TV debates will take place in the main hall of the Karen Demirchyan Sports and Concerts Complex, where the largest Public TV pavilion was built, specially designed for filming the pre-election debates of the 2021 parliamentary elections. The debates will be broadcast on June 8, 11, 16, and 17 at 22:00.

During the war, there is only an external enemy for the “Republic" (“Hanrapetutyun”) party, it has no internal enemy. The leader of the "Republic" party Aram Sargsyan said this in a conversation with reporters on June 7, answering the question of who they are going to cooperate with if elected.
"As a result of these elections, the formation of coalitions will be mandatory, it will depend on the number of MPs of the forces participating in the elections. Making predictions is difficult, it is complicated. There are situations when there is a war, when your enemy is on the border, in which case we do not rule out cooperation with anyone," said Sargsyan, adding that in non-war situations they will cooperate only with forces whose ideology is close to each other.
To the question of whether the "Republic" ( “Hanrapetutyun”) can cooperate with the "Armenia" alliance led by Armenia’s second president Robert Kocharyan, Sargsyan found it difficult to answer but noted that in terms of ideology they have categorically opposite approaches and differences, and it will not be perceptible to the public.

"These elections are between the being of the state and its absence, between losing or not losing the homeland. Our task is to establish internal solidarity," Armenia’s third president Serzh Sarkissian told the citizens during the campaign of the "I have Honor" (“Pativ Unem”) alliance.

“All those who will stand with us from this moment, and not from the moment when they feel our victory, we will declare an amnesty, because nothing is more important than the homeland. Otherwise, for me, they will remain deserters with all its consequences. By voting for this traitor, you agree to give up Artsakh, and later Syunik and you allow the war to continue,” added Sarkissian.

“These are not ordinary elections. The situation in Armenia is very explosive. So far, I anticipate that these elections will be the most disgraceful, the most dangerous elections in the history of Armenia,” the candidate of the "Armenian National Congress" Party for Prime Minister of Armenia Levon Ter-Petrosyan said today.

“The majority of our nation, the majority of all political parties haven’t yet understood that Armenia has no ally in the Karabakh issue. Now they are saying that if it’s not Russia, it will be the USA, it will be Iran. This means that we don’t want to learn from the bitter experience of the last thirty years,” Ter-Petrosyan added.

"The most important motivation of the "Civil Contract" party’s participation in the June 20 snap parliamentary elections is that the people do not lose their sense of being the owner of the country," Nikol Pashinyan, who is leading party’s electoral list, said during the meeting with the residents of Parakar community during the pre-election campaign.

He added that he has revealed two positions during the campaign, that is there are political forces that announce they are coming to take power, and their party, which announces that people will decide.