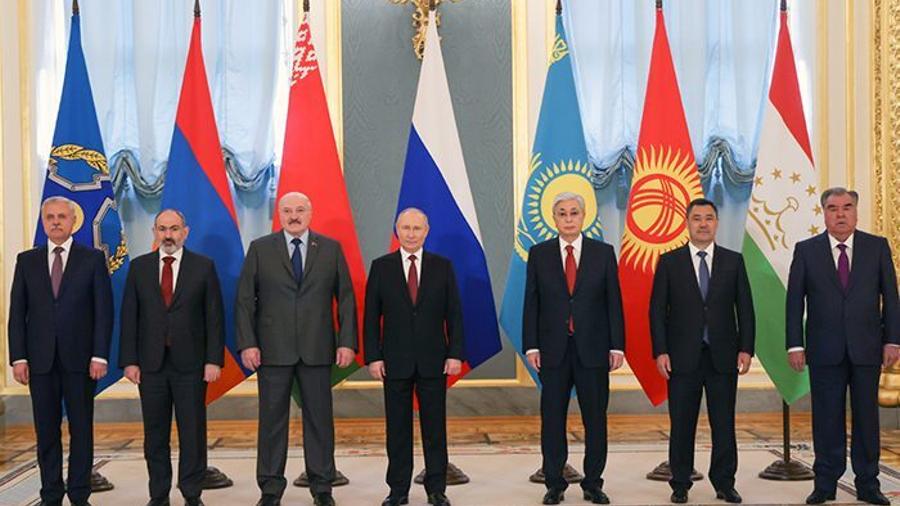 “The efforts of Armenia and other participants to reach peace agreements, legally formulate the borders and unblock the transportation communications play a positive role in the Caucasian region. Meanwhile, tension is being observed on the Armenian-Azerbaijani border”, the CSTO chief said.

He said that the information provided by the CSTO crisis response center confirms that skirmishes are taking place on the Armenian-Azerbaijani border almost every day.

At the CSTO joint session, it was announced that the representative of Kazakhstan Imangali Tasmagambetov will fulfill the duties of the CSTO Secretary General, Armenian Prime Minister Nikol Pashinyan said during the session of the CSTO Collective Security Council in Yerevan.

During the CSTO summit in Yerevan, Russian President Vladimir Putin drew the attention of the Heads of State of the CSTO member states to the need for a comprehensive solution to the Nagorno-Karabakh conflict.

"I agree with my colleagues who spoke earlier about this issue and the efforts to achieve a comprehensive settlement of the Armenian-Azerbaijani conflict. Of course, these are sensitive issues that require our attention," Putin said. According to Vladimir Putin, the agreements reached between the leaders of Armenia, Azerbaijan, and Russia in Sochi at the end of October "created a good basis for future compromises on fundamental issues"," he said.

The head of Belarus Alexander Lukashenko commented on the statement of RA Prime Minister Nikol Pashinyan that Armenia's membership in CSTO did not stop Azerbaijan from aggression against RA.

"It's not our job to hold someone back, but actually we have to respond. This is how we are ready to react," Lukashenko said.

He announced that one of the priorities of his country's presidency of the Collective Security Treaty Organization will be the settlement of the conflict between Azerbaijan and Armenia.

"There are nuances, and perhaps serious ones, but now we can thoroughly settle this conflict, which may flare up again. However, such a development of events will become possible only "if, first of all, the leadership of Armenia and, of course, Azerbaijan wants it," Lukashenko stated.

Nikol Pashinyan announced he's not ready to sign the documents of the CSTO aid project to Armenia.

"The fact that danger of Azerbaijan's new aggression against Armenia's territorial integrity remains, on October 28, CSTO General Secretary Stanislav Vasilii Zas announced at the extraordinary session of the CSTO Collective Security Council. In these conditions, the lack of a clear political assessment of the situation and failure to implement the above-mentioned decision may mean not only CSTO's refusal of alliance obligations, but also be interpreted by Azerbaijan as CSTO's green light for further aggression against Armenia.

And this contradicts the spirit and meaning of the fundamental documents of the CSTO. Therefore, based on this, dear colleagues, at this moment I think that the draft "On the declaration of the CSTO Collective Security Council and joint measures to provide assistance to the Republic of Armenia" presented for signing has not been sufficiently finalized, and in this form, with all due respect, I am not ready to sign these documents," Pashinyan mentioned in his speech.

"Today we held a session of the CSTO Collective Security Council. Of course, we did not manage to reach a consensus on all issues, and 15 out of 17 decisions were adopted. I hope that in this format we will manage to discuss the agenda of our bilateral relations, which is very full. It should be emphasized that our bilateral economic relations are developing at a high pace. I noticed that exports from Armenia to the Russian Federation increased by 80 percent this year. Of course, it is connected with some changes in logistics chains, but it is a fact that creates new opportunities for economic cooperation."

In his turn, Vladimir Putin said:

"First of all, I would like to thank you for the invitation, and congratulations on the end of the successful chairmanship of the CSTO. Indeed, Armenia carried out that work at a very high level, actively. Of course, it is rare to talk about all issues, but in general, the work was very intensive and useful.

You also highlighted our bilateral relations, which are undoubtedly considered alliances, have deep ancient roots, often there is no need to go into history, it is already clear to us what it is, and what significance it has for our bilateral relations. We discussed issues of regional matters, including issues related to regulation in the region, and we talked about unblocking transport infrastructure. I am very happy that there is an opportunity to hold a bilateral meeting within the framework of today's events."

On November 22, at 22:00-22:45, the units of the Azerbaijani Armed Forces opened fire from rifle weapons of different calibers in the direction of the Armenian positions located in the eastern part of the Armenian-Azerbaijani border. According to the spokesman of the RA Ministry of Defense, the Armenian side has no losses. As of 10:00 a.m. on November 23, the situation on the front line is relatively stable.