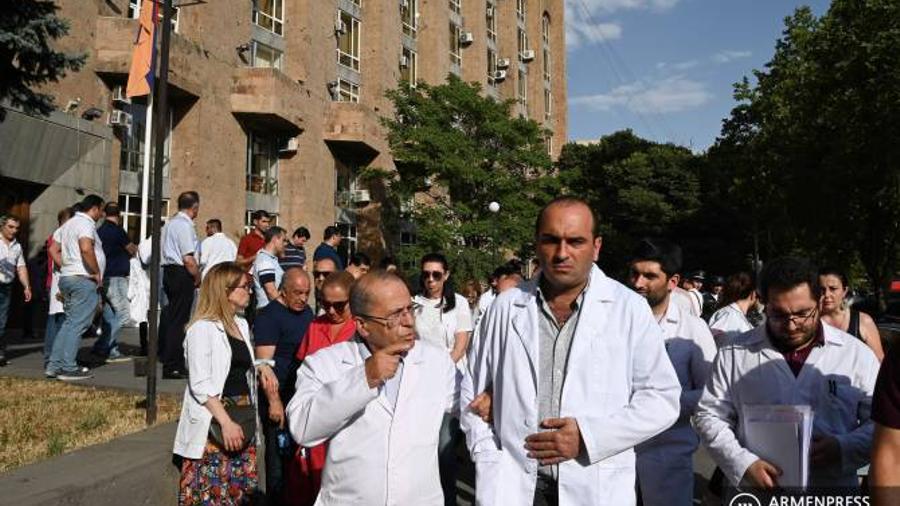 armenpress.am: Doctors in white coats held a protest action in front of the Special Investigation Service in defense of the director of "Izmirlian" Medical Center, doctor Armen Charchyan, included in the list of the "Armenia" alliance, against whom the court made a decision on arresting.

One of the doctors said that almost all of those gathered had taken part in the 44-day Artsakh war; he and one of his colleagues had been in the trench from the very first day.

"We hid our profession and went to the battlefield as volunteers. We fought the minesweeper on our shoulders against the enemy, and two days later we learned that we were needed, we went down to a hiding place, where we provided assistance. Our one request is the following: to be given an opportunity to work calmly and continue to carry out our mission," said traumatologist Samvel Sahakyan.

The doctor gave a positive answer to the observation of whether Charchyan's detention affects their work.

The doctors came up with an open letter again, this time the addressee was the head of the SIS Sasun Khachatryan.

Armen Charchyan is currently in hospital, and on June 27 his condition worsened.

"As far as I know, coronary angiography was performed. Hyperglycaemia does not stand on normal numbers, blood pressure does not normalize. No matter how much Charchyan thinks that all this is not happening to him, the human body has its laws, no one can do anything against those laws," said the traumatologist.

Earlier, 539 doctors sent an open letter to the authorities and the public to lift the detention of Armen Charchyan.