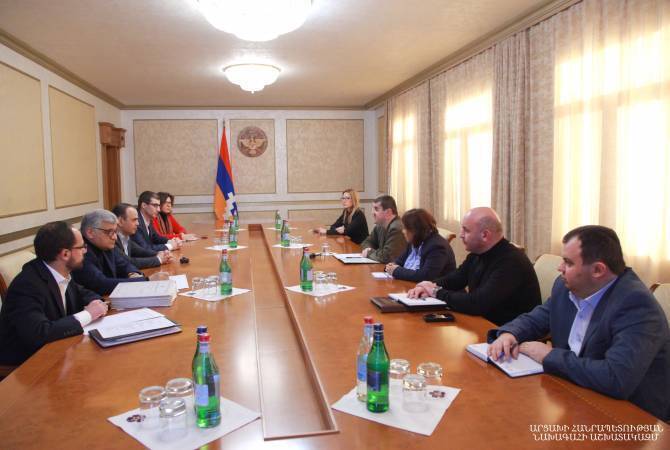 At the meeting, the sides discussed a number of issues related to Armenia-Diaspora relations, housing programs in Artsakh as well as possible solutions for the people who lost their homes as a consequence of the 2020 Nagorno Karabakh war.

President Harutyunyan highlighted that only through the joint efforts and coordinated work between Armenia, Artsakh, and the Armenian Diaspora worldwide it will be possible to restore and develop Artsakh. President of Artsakh also brought to the attention that tens of thousands of Armenians, who want to build their future in their homeland, need support.

Zareh Sinanyan, for his part, assured that Armenians of Artsakh are not alone and joint work to solve the issues of vital importance will be undertaken.

During his visit, Zareh Sinanyan also had a meeting with Artsakh’s newly appointed Foreign Affairs Minister Davit Babayan. The parties discussed the Armenian Diaspora’s involvement in the humanitarian programs in Artsakh and reaffirmed the significance of Artsakh for the Armenians around the world.

Armenian Minister of Nature Protection Romanos Petrosyan held a meeting with EU Ambassador to Armenia Andrea Wiktorin, PanArmenian.net reports. At the meeting, Minister Petrosyan presented three priority issues in the area of nature protection that Armenia has faced: restoration of the ecosystem of the Lake Sevan, systematic management of forests and protected areas, and building of a balanced model of relations between businesses operating in the protected areas and the environment.

Minister Petrosyan also referred to the recent Nagorno Karabakh war which caused not only human but also serious environmental issues forcing the Ministry to shift previously set priorities in the field.

Earlier, the Minister of Nature Protection addressed the international institutions drawing attention to the use of white phosphorus munition by Azerbaijan in the forests thus destroying valuable ecosystems and habitats and causing grave damage to the environment.

The Defence Army of Artsakh (Nagorno Karabakh) published the names of 72 more soldiers killed in fighting against Azerbaijan during the 2020 Nagorno Karabakh war.

Artsakh Emergency Service head Hunan Tadevosyan told RFE/RL’s Armenian service that about 1300 bodies have been found since the Moscow-brokered truce statement in November 2020.

According to the Ministry of Health, 3450 bodies of killed servicemen were registered in the Ministry’s forensic centre. The names of 1500 more soldiers have not been published yet since the identification is limited to 30 bodies daily. On Saturday, 30 unrecognizable bodies of Armenian servicemen were handed over to the Armenian side by the Azerbaijani forces.  Meanwhile, the Armenian side continues rescue and search operations of Armenian fallen troops in different directions.