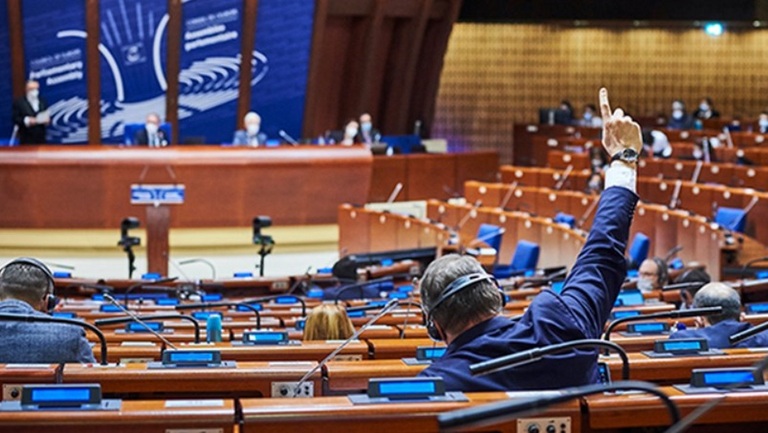 ‘To date, Azerbaijan is unwilling to provide the slightest information on the physical ’conditions of Armenian PoWs,’ Vladimir Vardanyan, MP of ruling ‘My step’ party said at the Parliament Assembly of the Council of Europe (PACE), ArtsakhPress.am reports.

Vardanyan reminded that following the 2020 Nagorno Karabakh war truce statement, ECtHR urged Azerbaijani authorities to provide information about the Armenian captives in Azerbaijan and have not received any information to this date.

According to Vardanyan, these people are in captivity in Azerbaijan not because they committed a crime, but simply because they are Armenians. ‘Can you imagine that in the 21st century we can have a Council of Europe member country that pursues state policy of racial discrimination against Armenians,’ Vardanyan addressed to his counterparts at PACE.

Ruben Rubinyan, head of the Armenian Delegation at PACE, in turn, discussed the issue of the PoWs during his meeting with Marija Pejčinović Burić, Secretary-General of the Council of Europe and Rik Daems, President of PACE. The officials assured that both the issue of Armenian PoWs and other detained people, as well as manifestations of hatred in Azerbaijan against Armenians, will in the centre of their attention.

After the Nagorno Karabakh truce statement on November 9, 2020, ‘Homeland Salvation Movement’, which blames Pashinyan for the defeat in the war, nominated Vazgen Manukyan as a Prime Minister of an interim government.

At the meeting, Manukyan proposed two paths to solve the political crisis in Armenia: ‘one is constitutional when 100 thousand people gather causing government’s paralysis and resignation, or a revolt,’ News.am reports.

Speaking about the possibility of snap elections, Manukyan said that he is strongly against the elections to be organised by Pashinyan and his team expressing his distrust towards the PM’s actions and organisation of fair elections.

The ruling ‘My Step’, in turn, held a discussion on changes of the Electoral Code on Tuesday, Armenpress.am reports. Hamazasp Danielyan, My Step MP informed that possible constitutional changes, the possibility of the self-dissolution of the parliament, and other points were discussed. In Danielyan’s words, although the package of Electoral Code changes is ready, the ‘My Step’ bloc cannot adopt constitutional amendments unilaterally. ‘This amendment should have 88 votes at least, thus, the opposition should raise its voice,’ the MP said.

Earlier, head of ‘Bright Armenia’ parliamentary opposition bloc Edmon Marukyan supported the solution of an interim government as opposed to snap elections, saying that he will run for PM, expecting votes from ruling ‘My Step’ MPs despite Pashinyan’s possible candidacy.

‘Several thousand hectares of forested areas were damaged as a result of the war unleashed by Azerbaijan against Nagorno-Karabakh,’ Armenian Minister of Environment Romanos Petrosyan told, PanArmenian.net reports.

‘There is no final assessment of the material damage inflicted on the country. During the fighting, however, fires broke out in some forested areas, which could not be extinguished amid the war,’ the Minister said. He added that respective international organisations were informed about the use of white phosphorus in the forests by Azerbaijan which caused significant environmental damage.

The Minister also shared the concerns of the ministry and environmental organisations over the future of Lake Sevan, the largest freshwater lake in the region. After the recent Nagorno Karabakh war two basins of the two main rivers feeding Lake Sevan came under the control of Azerbaijan. In Petrosyan’s words, the Ministry has conducted a relevant examination and presented the results to the Ministry of Defence.