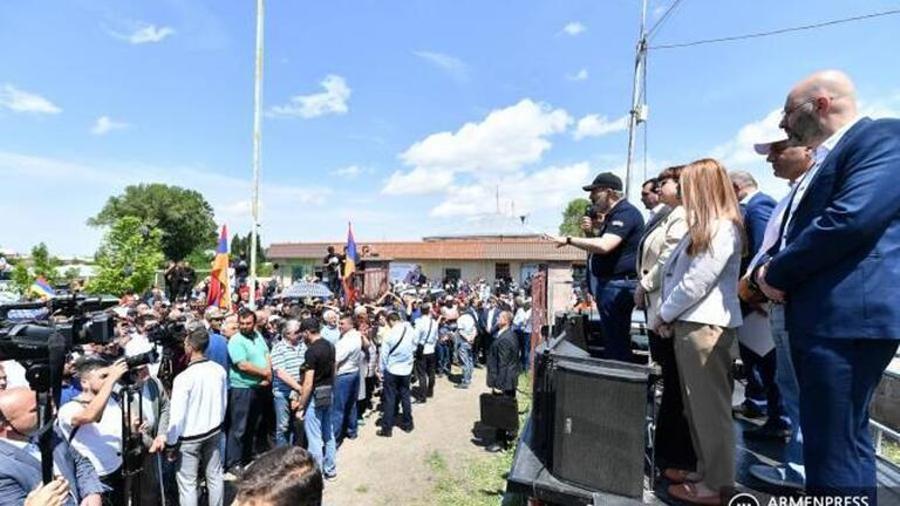 Pashinyan announces his son is ready to go to Baku as a hostage, today they will officially apply to Baku

"My son is ready to go to Baku as a hostage, today we will officially apply to Baku," Nikol Pashinyan said this today during a meeting with the Mets Mantash community of Shirak province.

He reminded that yesterday he announced he's ready to give his son to the Azerbaijani side so that they return all the POWs instead.

"I want you to get this correctly. Don't think this is the only direction, that it is a desperate move. A lot of intensive work is being done during this period," Pashinyan added.

Armenia’s Human Rights Defender Arman Tatoyan expressed deep concerns over the atmosphere during the election campaign, stating it further deepens the polarization in society and undermines the prospect of restoring solidarity in the country.

“Candidates for prime minister from all political forces running in the elections should take into account that every word they use extends to their supporters, and then they insult each other with the same words.

Those running for prime minister should be especially attentive to the words used and take into account all their figurative meanings. The real danger of such rhetoric is that it further deepens the existing tensions and poses a risk of being carried over into real life. It’s true that the acting prime minister of Armenia emphasized that it is not about physical revenge, but, obviously, it did not neutralize the dangerous impact of the mentioned. The monitoring of the Ombudsman’s Office revealed that in the social media platforms where materials with the headlines "civil revenge", "vendetta" and the like were spread, widespread insults, accusations and hate speech were recorded. These headlines confirm once again that the statements about non-physical revenge made no impact,” Tatoyan wrote.

During a meeting with citizens in the Gegharkunik region, Serzh Sargsyan released the promised recording of Nikol Pashinyan, where he speaks about the Karabakh talks, noting that Putin, Nazarbayev, and Lukashenko approached him in Sochi in May 2018, said that he had a great popular trust, and It is a historic chance to resolve the Karabakh issue. The Lavrov plan was proposed again, and Pashinyan noted that it is not a topic for discussion at all without clarifying the status of Artsakh. Then Nikol Pashinyan, in particular, says:

"It was clear to me, my problem was clearly formulated here, that whatever egg you want to have, you have to jump over this conveyor, jump, appear somewhere else. It will be, sorry for my expression, by seeming a little crazy, it will seem a little inadequate, but it will be, we have to get out of that conveyor.”

Earlier, Serzh Sargsyan gave Nikol Pashinyan 24 hours to prove his claim that he "lost army money in casinos," noting "I give 24 hours to that immoral person. Either he has to present a fact, or I will publish such facts about him and about his family that the society will spit on him.”

“Before the election campaign was launched, Nikol Pashinyan invited the former presidents of Armenia to a debate. He obviously found appropriate components for himself and invited them to a debate to talk about the past, but the presidents refused to debate with him. Today marks the third day of the election campaign, and they are debating over food, killing each other, trampling each other and are inviting each other to duels, but this has nothing to do with the past and present of Armenia. Nikol Pashinyan, I am inviting you to a debate to talk about the present and future. It’s clear that this debate won’t be the debate that you would like to have with the former presidents, but it’s the debate that citizens of Armenia want to listen to, and it has to do with the present and future. I’m ready to debate over these issues face to face and live at any television station. I’m waiting for Nikol Pashinyan’s response,” Marukyan said.

The highlights of Arthur Vanetsyan’s interview with Vladimir Solovyov

Former director of the National Security Service (NSS) and the PM candidate of the "I Have Honor" ("Pativ Unem") party Arthur Vanetsyan gave a live interview to Vladimir Solovyov, a Russian journalist and TV anchor. He talked about Armenia’s internal political situation, the Armenian-Russian relations, and, in particular, Russia's participation in the recent Artsakh war.

Addressing Vanetsyan, Solovyov said that he had heard many demands from Russia, including from his Armenian friends, as to why Russia was not sending troops and why the CSTO agreement was not working.

"But how? You did not recognize Karabakh, you did not say that Karabakh is part of Armenia. It is not under the auspices of the contract. What do you demand from Russia when the Armenian authorities did not find the strength to say what status Artsakh has, what status Nagorno Karabakh has?" Solovyov asked, to which Vanetsyan replied that the current authorities of Armenia did something wrong and that Artsakh should have been recognized on the 3rd or 4th day of the war.

"Russia really saved Karabakh, Russia took an active part, but we need to understand why this happened. For three years, the new Armenian authorities have constantly damaged relations with Russia. Remember all the statements of the capitulator (referring to Nikol Pashinyan, whom the opposition calls this way), his populist team, you will understand what happened. I generally thought that Russia could do something completely different. Russia has clearly helped, Russia continues to help. Today people live in Karabakh and Artsakh, those people live under the auspices of Russian peacekeepers. We should not forget about that, " Vanetsyan said.

The "5165" movement presented its election program

The founding members of the "5165" movement and its leader Karin Tonoyan visited Vanadzor on the second day of the electoral campaign, on June 8, to present the citizens their pre-election program and the necessary actions for the building of a national state. According to the press service of the movement, the role and significance of education and the effective management of the state were discussed.

They also referred to the constitutional issues of the Republic of Armenia, the diplomatic reasons for the defeat in Artsakh, the reforms in healthcare, the need for institutional reforms in the work with the Diaspora.

"We will fight for Armenia until the end on our own. The most important thing for us is the security of Armenia, our dignity, which has been violated, but it must be restored. We need to show the world that defeat has not broken us, we are ready to fight, " said Karin Tonoyan, the leader of the "5165" movement.