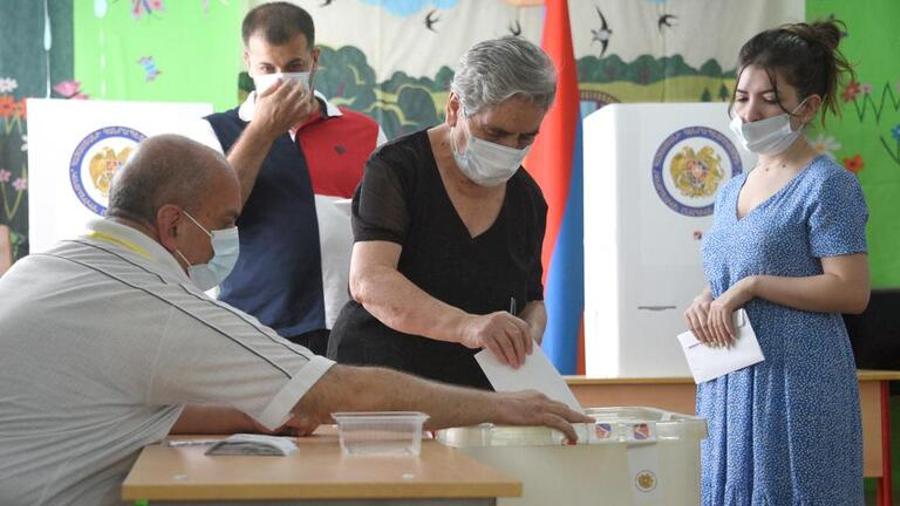 Pashinyan received congratulations from international partners on winning the elections

The President of France Emmanuel Macron sent a congratulatory message to the Acting Prime Minister of Armenia Nikol Pashinyan on winning the snap parliamentary elections. Macron mentioned he will be glad to continue the work they have jointly initiated during Pashinyan's first term. He also reaffirmed France's commitment as the co-chair of the Minsk Group, to search for a comprehensive settlement to the Nagorno-Karabakh conflict.

“On the occasion of the victory of the party led by you in the snap parliamentary elections in Armenia on June 20, I send you my congratulations and wish you success in your ongoing tenure for the benefit of the Armenian and French people. Sending you my most sincere congratulations and best wishes,” Macron's statement reads.

The Ambassador of the United Kingdom to the OSCE Neil Bush also congratulated the Armenian people on the successful conduct of the snap parliamentary elections and thanked ODIHR's election monitoring group for observing the elections and preparing reports on the results. Neil Bush shared concerns that the campaign period was characterized by intense polarization and provocative rhetoric, and that women were left out throughout the campaign.

“We were pleased to learn that the elections were competitive and generally well organized within the short period of time. Voters were provided with a broad range of options, and fundamental rights and freedoms were generally respected,” the Ambassador stated.

The RA President Armen Sarkissian met with the leader of the “Bright Armenia” party Edmon Marukyan and the chairman of the "Prosperous Armenia" party Gagik Tsarukyan. The sides exchanged views on the internal political situation.

President Sarkissian emphasized the role of "Prosperous Armenia" in the political life of the country, appreciated the constructive position of the party on holding snap parliamentary elections, and expressed hope that not being represented in the new Parliament will not affect the party's political activity.

Sarkissian underlined the importance of using the party's political experience for the benefit of the Republic of Armenia and expressed confidence that "Prosperous Armenia", as an extra-parliamentary force, will continue its active involvement in the political process.

During his meeting with Edmon Marukyan, President Sarkissian mentioned that the "Bright Armenia" party has played a role in the political life of the country in recent years, which is highly appreciated.

It was noted that "Bright Armenia" was one of the political forces that initially supported the idea of ​​holding snap parliamentary elections to overcome the crisis in the country, which could have been a decisive factor in terms of the state's stability and future. The President of Armenia expressed hope that although according to the preliminary results of the snap elections, "Bright Armenia" will not enter the National Assembly, it will be active outside the Parliament for the benefit of the country's development and progress.

Robert Kocharyan met with the community leaders of the "Armenia" alliance

The leader of the "Armenia" alliance, Armenia's second President Robert Kocharyan held a meeting with the leaders of the alliance's team member communities.

During the meeting, the post-election situation and the upcoming actions were discussed. Kocharyan expressed confidence that the representatives of the alliance should not give in to the illegal pressure exerted by the government, and that they should continue their usual work for the welfare of the communities.

Issues about legal and political assistance provided to community leaders were raised. Kocharyan assured that the ongoing process will receive a clear legal-political assessment. An agreement was reached to make such meetings regular.

The President of the Union of Armenians in Russia Ara Abrahamyan issued a statement claiming that party member Tigran Urikhanyan was not authorized to meet with acting PM Nikol Pashinyan after the elections.

“The party, which participated in the snap parliamentary elections in Armenia, was supported by Ara Abrahamyan and more than 12.000 voters who voted for us have nothing to do with the meeting and do not share Urikhanyan's post-election views," the statement reads.

It should be reminded that on June 23 acting PM of Armenia Nikol Pashinyan had a meeting with the leader of the "Alliance" party Tigran Urikhanyan.

“Unfortunately, we now represent only 12.164 voters in the Republic of Armenia. But we have what we have. While working in the Parliament, we had the opportunity to criticize you, your government, to criticize it in the period before the election campaign, and in fact, what was recorded by the voters probably means that the government will decide if it wants to listen to our voice,  our criticism or suggestions,” Urikhanyan had mentioned during the meeting.

The Commission on TV and Radio of Armenia approved the final conclusion on the maintenance of the established order of the pre-election campaign by the providers of audiovisual media service.

The conclusion will be published and submitted to the Central Electoral Commission of Armenia. It should be mentioned that OSCE / ODIHR Media Analyst Ivan Godarsky attended the meeting.