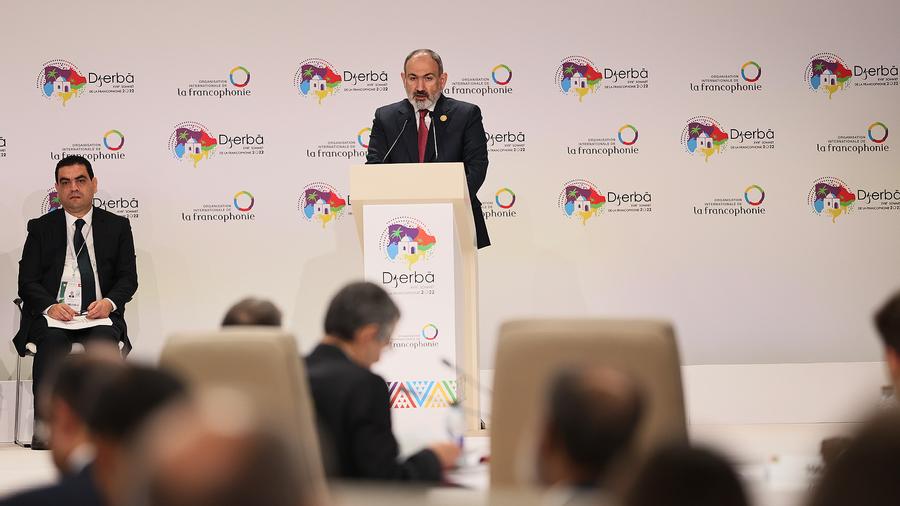 Prime Minister Nikol Pashinyan arrived in the Republic of Tunisia with his wife Anna Hakobyan on a working visit to participate in the 18th summit of the International Organization of Francophonie (OIF). The official welcoming ceremony was held at the international airport of Djerba city. They were welcomed by Tunisian Defense Minister Imed Memmich.

During the 18th summit of the International Organization of Francophonie, to be held on November 19-20, Armenia will transfer the presidency of the summit to Tunisia. Prime Minister Pashinyan will make a speech at the summit. As part of the visit, the Prime Minister will also have bilateral meetings with the leaders of different countries. The town of Francophonie will operate in Djerba.

Participating countries, FMC partners, and agencies will have the opportunity to showcase the cultural diversity of their countries; exhibition-sale of handicrafts, presentation of tourist opportunities, works of art and culture, as well as the national cuisine of the participating states. On this platform, the Republic of Armenia will present itself with a pavilion entitled "Culture and Technology", the core of which is the rich Armenian carpet-making culture.

Prime Minister Nikol Pashinyan participated in the 18th summit of the International Organization of Francophonie in Djerba, the Republic of Tunisia, the Prime Minister's staff reported.

Armenia chaired the organization for the last four years.

At the beginning of the event, the leaders of the countries, including Prime Minister Pashinyan, were welcomed by the President of Tunisia, Kaïs Saïed, and the Secretary General of the International Organization of Francophonie, Louise Mushikiwabo. French President Emmanuel Macron, Canadian Prime Minister Justin Trudeau, and leaders of dozens of other member states of the organization are participating in the summit.

"The aggression carried out by Azerbaijan, the victim of which was the Republic of Armenia on September 13-14, is a vivid manifestation of this reality.

Azerbaijan's unjustified and unprovoked aggression has led to the occupation of a part of the territories of Armenia, causing death and suffering to the civilian population and causing significant destruction.

The confirmed ceasefire, however, has not yet put an end to this country's ambitions for other territories of Armenia.

Faced with new threats, we expect the international community to make a fair assessment of the situation in our country today, condemning the occupation of some parts of the Armenian territory and demanding the return of Azerbaijani forces to their previous positions.

Nikol Pashinyan meets the PMs of France and Canada

Prime Minister Nikol Pashinyan met with French President Emmanuel Macron within the framework of the 18th summit of the International Organization of La Francophonie, which is being held in Djerba, Tunisia.

Macron also exchanged ideas regarding the results of the quadrilateral meeting of the leaders of Armenia, France, Azerbaijan, and the President of the European Council held in Prague in October. The implementation of steps to strengthen stability and security in the South Caucasus was highlighted.

Prime Minister Pashinyan stressed the need to eliminate the consequences of Azerbaijani aggression, to immediately withdraw Azerbaijani units from the sovereign territory of Armenia.

The leaders of Armenia and France also discussed issues related to the further development of the Armenian-French bilateral cooperation.

The interlocutors discussed various issues related to the further development of Armenian-Canadian relations. In this regard, Nikol Pashinyan and Justin Trudeau highlighted the Canadian government's decision to open a Canadian embassy in Armenia. The parties expressed confidence that the activity of the embassy in Yerevan will give new impetus to the expansion and deepening of bilateral political and economic ties.

Prime Minister Pashinyan highlighted the continuous support of the Canadian side to the agenda of reforms aimed at the development and strengthening of democracy in Armenia.

Pashinyan also had a meeting with the President of the European Council Charles Michel. They referred to the results of the quadrilateral meeting with the Prime Minister of Armenia, the President of the European Council, as well as the Presidents of France and Azerbaijan held in Prague in October. The importance of the implementation of the agreements reached by the Prague Declaration and the implementation of steps aimed at strengthening peace and stability in the region was emphasized.

Pashinyan emphasized the need to eliminate the consequences of the Azerbaijani aggression, and to immediately withdraw the Azerbaijani units from the sovereign territory of the Republic of Armenia. Pashinyan and Charles Michel also exchanged ideas on the development of further cooperation between Armenia and the European Union.

Today, Armenia transferred the presidency of the International Organization of Francophonie to Tunisia, RA Prime Minister Nikol Pashinyan announced this on Twitter.

"I wish the presiding country success in implementing the priorities of the Francophonie," he wrote.

Artsakh authorities are ready for negotiations with Azerbaijan authorities, but the topics and international format are focal to be decided in advance. Artak Beglaryan, the adviser to the Minister of State of Artsakh (Nagorno-Karabakh), wrote about this in his Twitter.

“The Artsakh rep will be assigned only by our authorities. We've contacted with each other but only on humanitarian mutual needs,” Beglaryan wrote.

On November 19, Artsakh President Arayik Harutyunyan convened an extended working consultation with the participation of representatives of the political forces of the National Assembly, the staff of the President of Artsakh reports.

The latest foreign political developments around the Republic of Artsakh and the continuously aggressive behavior of the Azerbaijani side towards the civilian population of Artsakh were discussed.

The participants of the consultation expressed their concerns regarding the created military-political situation, ideas were exchanged on the steps to be taken by the authorities.