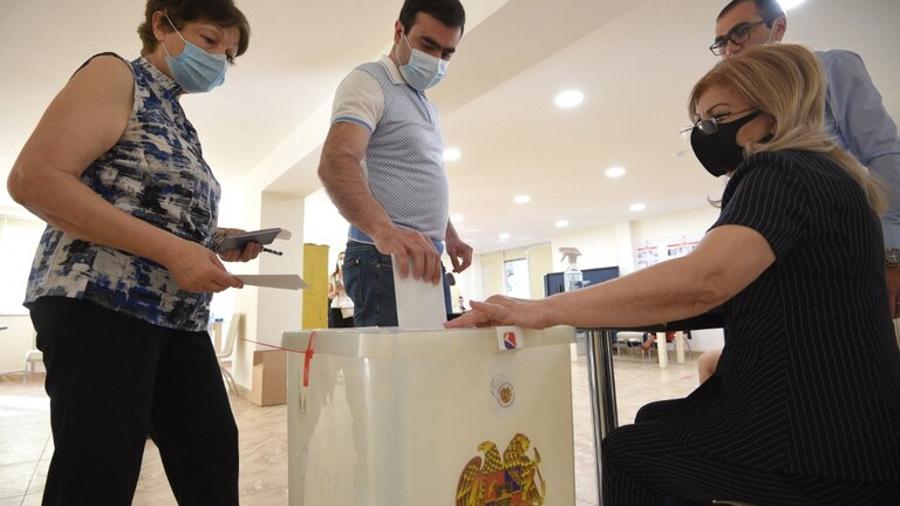 Acting PM of Armenia Nikol Pashinyan held meetings with the PM candidates and the leaders of the parties and alliances running in the 2021 snap parliamentary elections. It should be reminded that during yesterday's rally Nikol Pashinyan said that from today he will start political consultations with the forces running in the parliamentary elections who have intentions of having dialogues and discussions.

Pashinyan met with the leader of the "For the Republic" party and the PM candidate of the "Shirinyan-Babajanyan" alliance of democrats Arman Babajanyan. They discussed issues related to capacity building and prospects for further cooperation.

"Your victory in this election is indisputable and in this sense, we are fully ready to support your initiatives in defending the people's power," Babajanyan stated.

Pashinyan also hosted Suren Sahakyan, a member of the executive body of the "Citizen's Decision" party.

"For 2-3 years, the voice of the extra-parliamentary opposition was not heard. As for the elections, these results show that the political field is not competitive, it is disconnected from reality. We must work hard for new sprouts to appear in this field full of ashes," Sahakyan said.

In the framework of consultations with extra-parliamentary political forces, Pashinyan also had a meeting with the leader and the PM candidate of the “Bright Armenia” party Edmon Marukyan.

Pashinyan noted that he regrets the "Bright Armenia" party did not cross the threshold of entering the National Assembly because the party has played its role in the political life of recent years.

Marukyan said that his party will continue to play a role, to present and defend the principles and values ​​that underlie the party.

"I hope that the newly formed Parliament and the holding of parliamentary elections can be a basis for overcoming the internal political crisis in the country," Marukyan said.

Pashinyan had a meeting with the leader of the "Fair Armenia" party Norayr Norikyan as well. The situation in the country was discussed.

Later Pashinyan also met with Samvel Babayan, who was the first number on the pre-election list of the "Liberal" party.

Pashinyan said he regrets the political force led by Babayan did not enter the Parliament.

"Armenia has high hopes with you for ensuring development and keeping it protected.  I am sincerely happy. It does not matter what percentage we received, what happened, how it happened - people are the ones who decide," Babayan said.

The "National-Democratic Pole" party, which received 18.773 votes or 1.47% of total votes in the snap parliamentary elections, rejected meeting the acting PM of Armenia Nikol Pashinyan.

The party issued a statement, noting that it has received an offer from Nikol Pashinyan to meet with him as a political force participating in the elections, in particular, the offer referred to the person leading the pre-election list of the party, former PM candidate Vahe Gasparyan.

"The proposal was officially transmitted by his advisor Arayik Harutyunyan. The "National-Democratic Party" rejected the offer of the meeting, as it does not consider it expedient to meet with Nikol Pashinyan," the statement reads.

The "Pan-Armenian National Statehood" party submitted a recount application in three of its territorial election commissions, the authorized representative of the party Levon Baghdasaryan informs. According to him, the issue of submitting a recount application has the same reason in all three polling stations, that is the ballot was cast, but the vote was not registered.

The "Free Homeland" alliance has issued a statement claiming that it does not recognize the snap parliamentary election results.

"We united the forces of our parties, aiming to use the event called "snap parliamentary elections" to carry out nationally beneficial activities and to radically reform the situation in the country. However, the June 20 voting proved once again that under the current constitution and the illegal electoral code resulting from it, as well as in an atmosphere full of threats and moral pressure, it is impossible to hold democratic elections," the statement reads.

Meanwhile, the Conservative Party, which is part of the "Free Homeland" pre-election alliance, does not dispute the results of the snap parliamentary elections due to the urgency of disrupting the Russian-Turkish project to create chaos in Armenia.

During a press conference, the PM candidate of the “Armenia” alliance, Armenia’s second president Robert Kocharyan announced that the election results were unexpected for them. He said the alliance members assume that there have been massive violations. According to Kocharyan, this was the last bullet of the revolution, but he doesn't think the government assesses the situation correctly. Commenting on taking the parliamentary mandates, Kocharyan said that the alliance does not have a final decision on this issue. However, he stated that he finds it difficult to see himself in the newly-elected parliament.

Acting Prime Minister of Armenia Nikol Pashinyan had a telephone conversation with President Armen Sarkissian. The President congratulated Nikol Pashinyan on the "Civil Contract" party's victory in the snap parliamentary elections. Sarkissian wished success to the future government of Armenia for the benefit of the country’s further development, progress, people’s welfare, and state security.

RA President Armen Sarkissian had a telephone conversation with PM candidates of the "I Have the Honor" ("Pativ Unem") and “Armenia” alliances Arthur Vanetsyan and Robert Kocharyan. President Sarkissian congratulated them for winning Parliament seats as a result of the snap elections and wished effective work for the benefit of Armenia.

The CEC upheld the motions to prosecute an MP candidate

According to the materials prepared by the Shirak Regional Department of the RA National Security Service, factual information was obtained that the head of the Artik regional office of a party alliance, who was also an MP candidate of the alliance, from June 14 to 16, in a preliminary agreement with a group of people offered, promised and provided a bribe of 10.000 AMD to each for participating in the snap parliamentary elections scheduled for June 20, 2021, and to vote for the alliance, the RA Prosecutor General's Office reports.