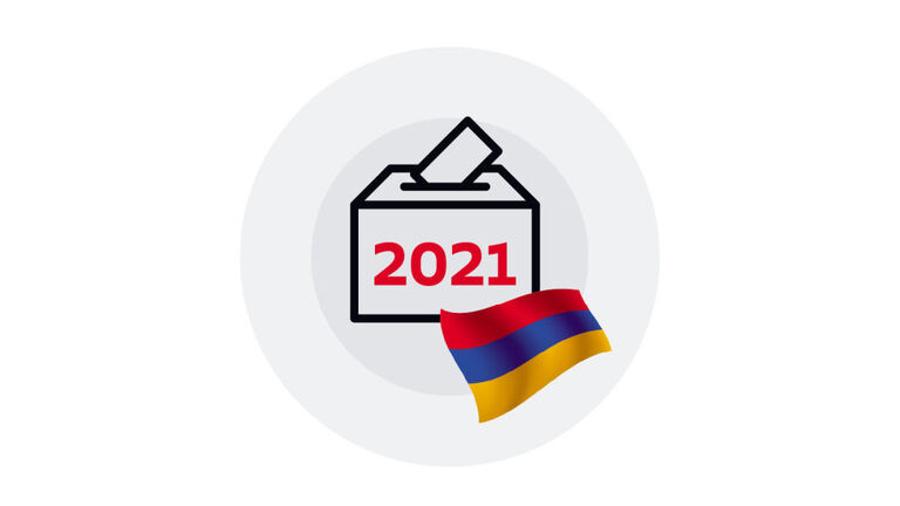 The voting in snap parliamentary elections is over

The time provided for voting in the snap parliamentary elections is over. Polling stations all over the republic are closed at 20:00. At midnight, the CEC will start announcing the results online. Let us remind you that the voting for the snap parliamentary elections in Armenia started today at 08:00. According to the Central Electoral Commission, there are 2.593.572 voters on the voter lists. 21 parties and 4 alliances of parties are running in the snap elections, where 2.510 candidates are included.

After voting and leaving the poll station, the PM candidate of the "Bright Armenia" party Edmon Marukyan said his party voted for solidarity and to restore peace in the country for tomorrow.

"We have said that tomorrow is the time to restore internal political solidarity and reconciliation in the country. Of course, it could have been done earlier, but the elections are a chance for us to take that step in this situation. I have high hopes that solidarity and the restoration of peace will not have an alternative for us, because our challenges are much bigger than we imagine. In this sense, we simply have no alternative. We must put aside our small truths for the sake of a greater truth, for the sake of a greater value, which is the state, our statehood," Marukyan mentioned.

Summing up the pre-election campaign, Marukyan said that it was full of hate speech.

After voting and leaving the poll station, the PM candidate of the "Armenia" alliance Robert Kocharyan talked about the possible cooperation with Armenia's Ex-PM Karen Karapetyan, saying that it is obvious that Karen Karapetyan is with them, but they have not decided what kind of cooperation will be in the future.

The PM candidate of the "I Have Honor" (“Pativ Unem”) alliance Arthur Vanetsyan told reporters that today it's a choice for the sake of Armenia's existence.

"The government is in agony, all the steps are taken on weakening the positions of the opposition. They understand that they will never have a chance to reproduce or form a government in Armenia, so they are making every effort to cling to their seats," he said.

Speaking about the possible tension after the elections, Vanetsyan said that the opposition is not responsible for it.

"The de facto government is responsible for it. I think there will be no post-election developments because the election results will prove who will form the government in Armenia," he added.

After voting, the PM candidate and the leader of the "Prosperous Armenia" party Gagik Tsarukyan said that he voted for a safe homeland, for strong, developing, prosperous Armenia.

To the question of whether the "Prosperous Armenia" will form a coalition with Nikol Pashinyan's party, Tsarukyan responded, "I exclude that. I have said it several times."

Tsarukyan also didn't comment whether he will form a coalition with Robert Kocharyan.

Leaving the polling station the leader and the PM candidate of the "Freedom" party Hrant Bagratyan spoke with reporters and stated that he voted for a change.

"I see the future of Armenia as I wrote it in our program. We have come to save the homeland. This is a frontline, a battlefield. This is a war which we are going to win,” Bagratyan said.

After casting the ballot, Armenia's third President Serzh Sargsyan said he has made his choice back 33 years ago, adding that today his attitude has not changed.

“I voted for secure, sovereign, economically developed Republics of Armenia and Artsakh, for powerful Army, for the inviolability of our borders, and for the reconciliation of our society. In a divided society nothing can be achieved: neither security nor economic progress," he said.

Sargsyan added that these elections are greatly different from the previous ones.

After voting and leaving the poll station, the PM candidate of the "Zartonq" party Ara Zohrabyan, gave an interview to the Public Television of Armenia.

"We want a national government to be formed because the experience has shown that anti-national phenomena have suppressed our values, and the war was the vivid proof of that.  We expect that with these elections our people will reject the anti-national. Regarding the chances of being elected, our expectation is that we will be the defenders of the national values ​​in the National Assembly. Regardless of whether people manage to trust us in this short period of time, whether they vote or not, we will continue our work," he said.

As of 16:00, the RA Police received 57 reports related to the elections

As of 16:00 on June 20, the RA Police received 57 reports, 20 of which were processed according to the features of Articles 180 and 181 of the RA Criminal Procedure Code, and 37 did not contain features of an actual crime and are being checked as an accident.

The RA Police informed that one of the cases containing features of an apparent crime was registered in the city of Yerevan, the other 19 cases were registered in the regions of the republic. The reports on the received crimes referred to voting more than once (14 cases), obstruction of the exercise of the right to vote (2 cases), violation of the secrecy of the ballot (1 case), intentional damage to property (1 case), infliction of bodily harm (1 case), other violation (1 case).

A gunshot was fired at the windshield of PM candidate of the "Shirinyan-Babajanyan Alliance of Democrats" Arman Babajanyan’s car early in the morning.  Babajanyan said he has reasons to believe that the shot fired at his car on election day was a warning from what he described as an “armed group” that is after him and the two other key figures of his alliance.

"We are unbreakable, our will can’t be broken. We continue our work, and we call on our citizens to go out and vote without hesitation,” Babajanyan told reporters. He added that the suspect hasn’t been detected so far, and his car is now at the police station.

Later the Investigation Committee reported that a criminal case has been initiated in relation to the shooting of the deputy candidate's car. A complex forensic-post-forensic examination has been appointed. The investigation is underway.

It should be reminded that yesterday the Central Electoral Commission of Armenia applied a warning to the "Civil Contract" party and its PM candidate Nikol Pashinyan for violating the order of the day of silence. This was after Pashinyan went live broadcast on Facebook yesterday, June 19.